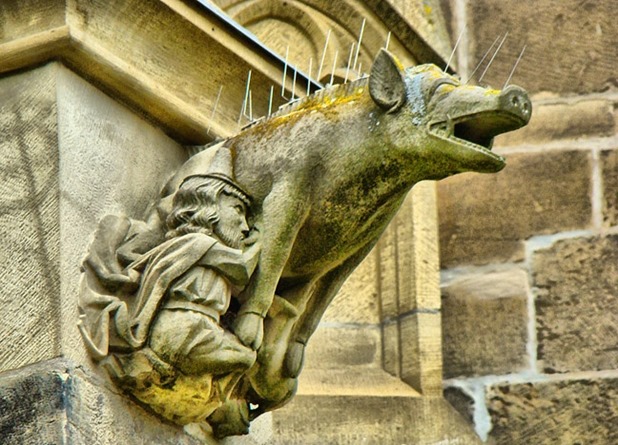 The greatest trick the Devil ever pulled was to convince the world he was an Israelite. Through this one lie, Jews have managed to infiltrate Christianity and subvert it completely, to the point where many Christians are now worshipping the Jews instead of rejecting them entirely. Pope Francis has even gone so far as to say that the Jews are above Christians as they have a previous dispensation from God. The very people who the Apostle John called the Antichrist, have now been raised to the position of equals with God.

This was not always so, for the first thousand years of the Church the Jew was excluded from White society entirely, he was banned from marrying Whites, banned from doing business with Whites and banned from taking part in White society.

Our ancestors were depicting the Jews with horns and tails and calling them devils for a millennium before any Jew first set foot on the soil of Britain. They knew this because this is what they were taught by their preachers and they got it straight from the pages of the Bible. Even Alfred the Great was aware that the Jew was a completely lost cause for ever and hated by God.

Sven Longshanks looks at the famous quote where Jesus called the Jews devils and accused them of being responsible for all the righteous blood shed since the beginning of the world. This is not the only verse to describe the Jews as devils and after listing some of the others, Sven goes back through the history of the Jews as told in the Bible and elsewhere to explain how this was not just an insult, but a damning indictment of the Jews and a permanent exclusion from them being candidates for Christianity.

If the Jews are a race of devils, then how could they ever repent?

Were they really responsible for the murder of Abel and if so, how? Why are they only Jews if they have a Jewish mother? Could this be a clue as to how this guilt was passed on down to them?

All these questions are answered and along the way we encounter a record of the first race-mixing event in history and prove definitively that Christ was not a Jew and neither were his disciples, with the exception of the Jew Iscariot who betrayed him.

We also look at the reasons for why people get confused over genetic studies and Khazar theories, hopefully coming to a conclusion that satisfies everyone.

Yorkshire Forum: The Greatest Trick the Devil Ever Pulled

Your browser doesn’t support HTML5 audio. Here is a link to the audio instead.

There will be more from the Yorkshire Forum next week on Radio Aryan.