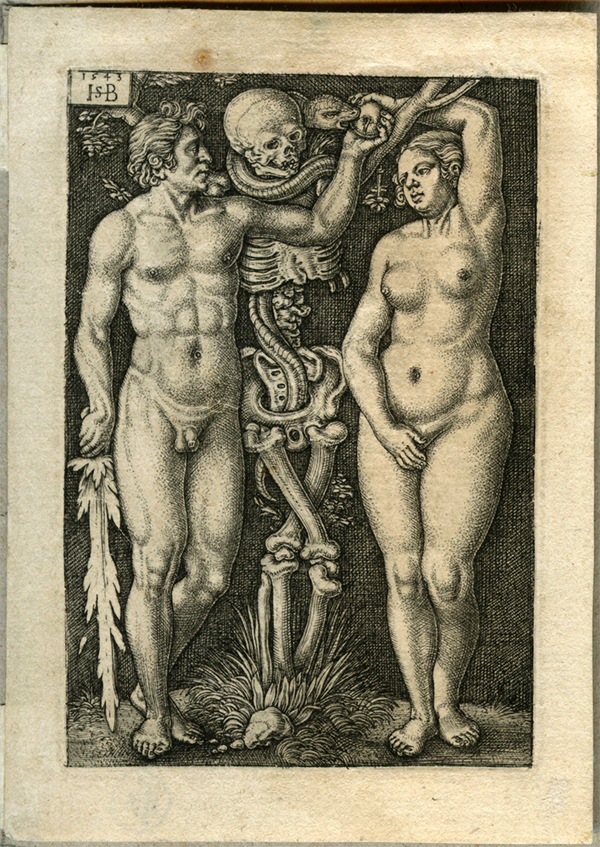 Adam and Eve, the roots of the Aryan tree.

Only very recently has it been taught that the races of man originated from the same ancestor. This certainly doesn’t have any Biblical origin, although the leaders of the apostate Church would like people to think it did. In their misplaced desire to make the contents of the Bible applicable to everyone, they have neglected to properly investigate the definition of the term ‘Adam’, or what the Hebrew word translated throughout the Bible as ‘man’ is.

The Hebrew word ‘Adam’, which gets translated as ‘man’ and ‘mankind’ throughout our English Bibles, actually has another definition that identifies exactly which particular type of what we call today ‘man’, is being talked about. Strong’s Bible Concordance lists the two definitions for Adam:

The word ‘ruddy’ means ‘having a fresh, healthy red colour’, and is associated with the ability to blush. There is only one type of man that has ruddy cheeks and is capable of blushing and that is the white man.

‘Blushing’ is a hot, red flushing of the cheeks unique to white people when they feel humility, shame or embarrassment, and is often associated with an inability to hold the head up and bear another’s gaze. Darwin described blushing as ‘the most peculiar and most human of all expressions’.

The Apocryphal text, ‘The Testament of Judah’ associates blushing with the spirit of truth:

50 And the spirit of truth testifieth all things, and accuseth all; and the sinner is burnt up by his own heart, and cannot raise his face to the judge.

The LORD God’s breathing into the nostrils also caused the Adam’s chest cavity and lung capacity to expand. The effect of this means that the white man can float with little effort in water, while the black race sinks.

Something else I have noticed that the spirit of truth appears to have bestowed upon the white man, is the ability to dowse. Dowsing for water and other objects seems to be a gift that is only accessible to the Adam. It prevented the Negro from being able to cross the deserts in Africa until relatively recently, and I have searched among dowsers for evidence of any negro practitioners, but to no avail.

The LORD God breathes the breath of life into the Adam’s nostrils, making him a living soul.

Throughout the Bible there are physical descriptions of the descendants of Adam, making point of the fact that they were white, ruddy, and could blush.

Lamentations ch 4 v 7
Her Nazarites were purer than snow, they were whiter than milk, they were more ruddy in body than rubies, their polishing was of sapphire.

Song of Solomon ch 5 v 10
My beloved is white and ruddy, the chiefest among ten thousand.

Jeremiah ch 30 v 6
Ask ye now, and see whether a man doth travail with child? wherefore do I see every man with his hands on his loins, as a woman in travail, and all faces are turned into paleness?

Isaiah ch 29 v 22
Therefore thus saith the LORD, who redeemed Abraham, concerning the house of Jacob, Jacob shall not now be ashamed, neither shall his face now wax pale.

Ezra ch 9 v 6
And said, O my God, I am ashamed and blush to lift up my face to thee, my God: for our iniquities are increased over our head, and our trespass is grown up unto the heavens.

Jeremiah ch 6 v 15
Were they ashamed when they had committed abomination? nay, they were not at all ashamed, neither could they blush: therefore they shall fall among them that fall: at the time that I visit them they shall be cast down, saith the LORD.

1 Samuel ch 16 v 12
And he sent, and brought him in. Now he was ruddy, and withal of a beautiful countenance, and goodly to look to. And the LORD said, Arise, anoint him: for this is he.

When the white race adulterates its blood with the dark races, the ability to blush is lost in the offspring. I personally know of four generations that this has held true for, even though each generation looked white, and came from breeding with whites.

From the Biblical evidence and from observation, this implies that all those white people today who can still blush, have a direct and pure bloodline going all the way back to the patriarch of the white race.

Christ talks of time being shortened in the last days, because if it were not, no flesh would be saved, as even the elect would be deceived. I believe that the white race that have remained pure all this time are the elect. Our brothers from the past fell from grace, interbred with the other races and are no longer here with us at the end times. When the devout of our ancestors realized what was happening to the white race in India, Egypt, Mesopotamia, Palestine, Persia, Assyria and elsewhere, they fled to where they could be certain that the blood had remained pure, the colder climates of Europe.

So if the other races cannot claim descent from Adam, then where is the reference to them being created in the Bible? There are two words in our English Bibles that appear to refer to the other races. One of these words is ‘creature’, and the other is ‘beast’. Among the Strong’s definitions for them are these:

5315 Creature – A creature or person as a whole, self, body, even corpse:-soul, man, persons, beast, moving creature.

There are many verses in the Bible that confirm that the ‘beast of the field’ refers to other bipeds, and that the Adam is seperate from them:

Exodus ch 22 v 9
Whosoever lieth with a beast shall surely be put to death.

Leviticus ch 18 v 23
Neither shalt thou lie with any beast to defile thyself therewith: neither shall any woman stand before a beast to lie down thereto: it is confusion. (confusion of the kinds)

Jeremiah ch 21 v 6
And I will smite the inhabitants of this city, both man and beast: they shall die of a great pestilence.

Jonah ch 3 v 8
But let man and beast be covered with sackcloth, and cry mightily unto God: yea, let them turn every one from his evil way, and from the violence that is in their hands.

Zechariah ch 8 v 10
For before these days there was no hire for man, nor any hire for beast; neither was there any peace to him that went out or came in because of the affliction: for I set all men every one against his neighbour.

Jeremiah ch 27 v 6
And now have I given all these lands into the hand of Nebuchadnezzar the king of Babylon, my servant; and the beasts of the field have I given him also to serve him.

Joel ch 1 v 20
The beasts of the field cry also unto thee: for the rivers of waters are dried up, and the fire hath devoured the pastures of the wilderness.

Zechariah ch 14 v 15
And so shall be the plague of the horse, of the mule, of the camel, and of the ass, and of all the beasts that shall be in these tents, as this plague. (underlining and brackets mine)

The writers of the Bible had no concept of ‘races’, ‘human beings’, or ‘the brotherhood of man’, all they knew of were the Nations that descended from Adam, and the people who were not , who they called ‘the beasts of the field’. The Indo-Aryan writers were similar in this respect, calling the beasts ‘our two legged animals’ and referring to themselves as ‘the twice born’. Possibly in reference to them being born from the heavens, as well as from the earth. 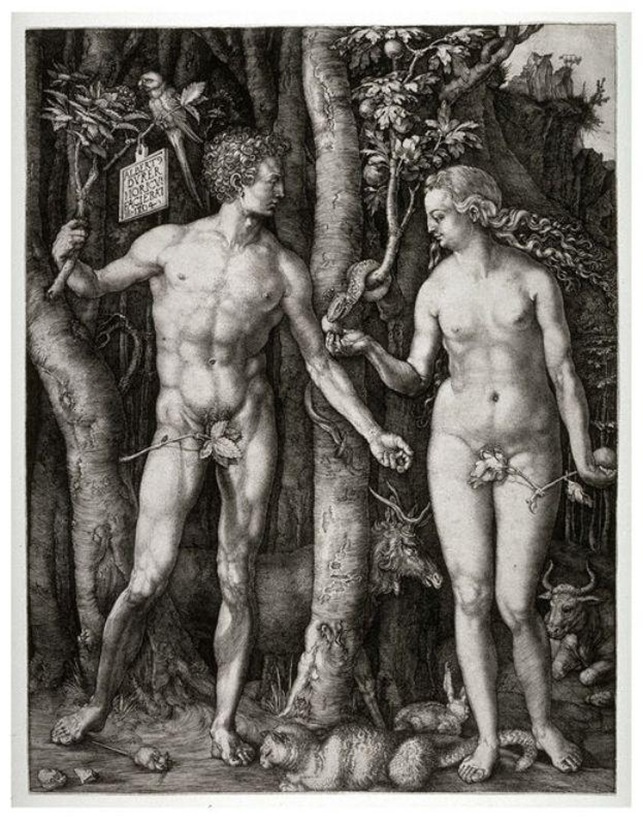 99% of all representations of Adam and Eve accurately portray them as white. How could their descendants possibly be anything else?

Adam alone was created ‘in the image of God’. All the other creatures were created in their kinds and were made entirely from the already created earth or waters. The first chapter of Genesis repeats the instruction for everyone to produce ‘after their kind’ nine times. This is then reinforced by God blessing the world and pronouncing it very good. There was no evil in the world while the kinds only reproduced after their own kind.

Adam was special, he was given the breath of life, made into a living soul, and given dominion over everything that God had made from the earth and the waters. He was put at the top of the hierarchy and even tested to see whether he understood his position and the uniqueness of his kind: The LORD God states that he will create a helpmeet for Adam, then parades the beasts of the field in front of him who Adam refuses as a helpmeet, choosing to exercise his dominion by naming them instead.

The LORD God then makes a helpmeet for him from Adam’s own flesh, and Adam declares ‘Therefore shall a man (an Adam) leave his father and his mother, and cleave unto his wife: and they shall be one flesh.’

Saint Paul reminds us of this verse thousands of years later where he says ‘All flesh is not the same flesh: but there is one kind of flesh of men, another flesh of beasts, another of fishes, and another of birds.’ 1 Corinthians ch 15 v 39.

Through God’s grace the Adam was given something more precious than anything else on earth. This was reflected in his flesh, in his ability to blush, and in the name he was given. It would identify him for all time through his descendants features. This gift enabled him to be able to subdue the earth and make it serve him. It united him to his God and gave him a direct route to attain communion with him. This gift is what has inspired the White man to create every civilization known to history. It is the reason why even the lowest strata from a White society can be uprooted and stranded in a wilderness, yet still succeed in taming it and making it flower. It meant that the Adam could survive and adapt to any conditions, bending nature to his will with his holy dispensation.

It is no surprise that there is so much promotion of race mixing today to the white race, as we are the oldest and the most blessed part of it. We have endured all this time since Adam, rejecting the temptation to blaspheme the living soul that breathes within us. We have outlasted the corrupted civilizations of old and maintained our purity, while our brothers descended into licentiousness with beasts and neglected to pass the torch on to their children. Our ancestors however did not despise their birthright, and the torches that we now carry are the oldest and most potent of all. We have resisted the longest out of all the children that came from Adam, and we are now facing nothing that we haven’t defeated before. Never forget that we are the elect, our roots begin with Adam, and as long as we are still a part of his unique tree, that precious gift he was given remains ours too.

16 thoughts on “ADAM THE ARYAN”